Treasures of Tartary and Other Heroic Tales, by Robert E. Howard (Hardcover) 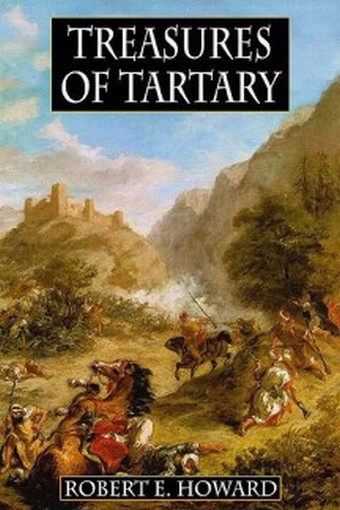 Treasures of Tartary and Other Heroic Tales, by Robert E. Howard (Hardcover)

The first edition of Treasures of Tartary and Other Heroic Tales is a 600-copy limited edition. This Smythe-sewn hardcover is designed specially for collectors and should sell out quickly. It's due from our printer 6/11/2004; you may preorder copies now to reserve yours. Copies will ship to customers between July 11 and July 13.

One situation which Howard liked to use was the American hero in the Middle East. In the opening paragraph of "Treasures of Tartary," it is Kirby O'Donnell who finds himself plunging into the middle of a battle in a dark alley in Shahrazar. Though O'Donnell is an American, he dresses like an Arab, is fluent in their languages, and is burned so dark by the sun that he can pass for a native, which he does in this story. None of the other characters are aware of his true identity. Yet Howard frequently refers to O'Donnell as "the American," reminding the reader that O'Donnell is an outsider, someone who despite his appearance will always be a Westerner and not truly a part of the surroundings in which he finds himself.

So is Francis Xavier Gordon, known to most of the inhabitants of the Middle East as El Borak. More specifically, Gordon is a Texan, a former gunfighter who had more than his share of adventures in the American West before he ever ventured into the Middle East. (Howard does no more than drop intriguing hints about these adventures in some of the El Borak stories; we never get the details of them.)El Borak is a contemporary of T.E. Lawrence, and Lawrence is mentioned several times in the story "Son of the White Wolf," setting this tale firmly during World War I. Gordon is well-known to the Arabs; the name El Borak is used to strike fear into the hearts of children. Although, like Kirby O'Donnell, Gordon speaks the languages of the region like a native, he doesn't try to disguise himself as one. He wears a mixture of Western and Eastern clothing and carries a rifle and pistols like the former American gunfighter that he is.Howard plays up this blending of East and West by comparing the chivalry of the Arab tribesmen to the rough code of honor of the American frontiersmen. When Gordon is being pursued by these tribesmen in a running gun battle, Howard likens his strength and stamina to that of an Apache Indian. In a way, though the setting is different, it is as if Gordon has brought something of the American West to the Middle East with him.

In "Black Vulmea's Vengeance," we find more references to American Indians, even though the story is set on the Pacific coast of South America in the Sixteenth Century. Like many another Howard hero, Black Terence Vulmea has wandered far from home, which in his case is Ireland. As master of the pirate ship Cockatoo, Vulmea raids English and Spanish shipping off the South American coast until he is captured and finds himself in an on-shore adventure with a hated English enemy from times past, when Vulmea was still a young man in Ireland.

"Boot-Hill Payoff" is one of Howard's relatively few traditional Western stories. It's packed with the action that the Western pulps demanded, but it also showcases a variation on the theme of the wandering hero. In this case, Buck Laramie, the only surviving member of a family of outlaw brothers, has been away from his home for a long time, but when he returns to the Texas cattletown of San Leon where he was raised, hoping to redeem himself and the memory of his brothers, he immediately finds almost every hand against him.

"The Vultures of Wahpeton" is Howard's longest, most complex, and best traditional Western. It's the story of Steve Corcoran, a Texas gunslinger who finds himself far from home in a mining boomtown. He has been in Kansas and California, he tells a man he meets on the trail, and has drifted to the northern gold fields, but he is a cowboy at heart, not a miner, and wants to go back to Texas. Sudden death gets in his way, and he finds himself drawn into a conspiracy by a gang of outlaws intent on taking over the town of Wahpeton.

"The Vultures of Wahpeton" is not only an important Robert E. Howard story, it's important as well in the overall history of Western pulp fiction. Its moral complexity, especially in the hero, Steve Corcoran, puts the story in the forefront of a movement away from what pulp editors called the "gun-dummy" story and toward more realistic Western fiction. In later years, authors such as H.A. De Rosso and Gordon D. Shirreffs would mine this vein of realism for some very good stories, but Robert E. Howard was there first.