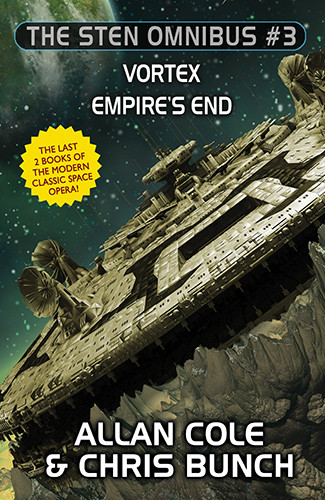 Hailed as a “landmark science fiction series,” the Sten novels have thrilled millions of readers all over the world. Set three thousand years in the future, they tell the tale of a tough, street-wise orphan who escapes his fate as factory planet "delinq" to become the strong right-hand of the most powerful man in the Universe--a man hailed by his billons of subjects as "The Eternal Emperor." This mammoth volume collects the final 2 novels in the classic modern space opera series: VORTEX, and EMPIRE'S END.

The Eternal Emperor has returned from the dead to pick up the pieces of his crumbling Empire. But even that great leader cannot halt the Empire’s decline alone. And so Sten -- master spy, military strategist, and assassin -- finds himself appointed Ambassador Plenipotentiary to the Altaic Cluster, where a brewing civil war threatens the stability of the Empire itself... Then, Sten finds himself branded a traitor and renegade to the Empire in the midst of a dangerous, galactic Civil War!