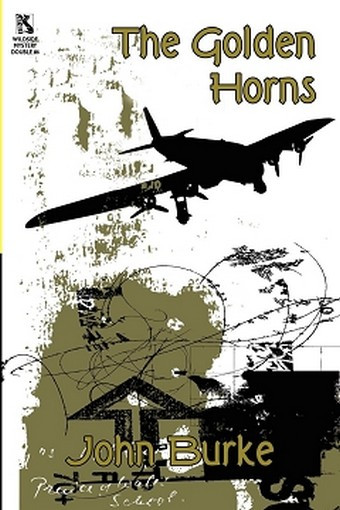 In the tradition of the old "Ace Doubles" two-in-one books (flip one over to read the second title)--here is the sixth Wildside Mystery Double.

THE GOLDEN HORNS, by John Burke.

Martin Slade wants to bury his past as a saboteur in wartime Denmark and smuggler in postwar Europe. Returning to Denmark as a respectable journalist, he's approached by Birgitte Holtesen, an old flame now married to an elderly trader. Birgitte wants Martin to smuggle something back to English for her--but he refuses. She enlists instead a young musician, Sean Clifford. When Martin returns to England, he's attacked in his flat, and the place is ransacked. And then he learns that Sean has been murdered--and his body horribly mutilated. It's up to him to find the killer. A suspenseful mystery by a master storyteller.

An innocent man is arrested for a murder committed by a woman. A guilty killer confesses to a murder--but the police arrest an innocent woman. A man finds the woman of his dreams--only to discover that he's entrapped in a nightmare. The tenants of a new block of flats are so delighted with their home that they don't ever want to leave--little realizing that they CAN'T leave. A husband and wife find thata their wishes can come true--but with death as the price. Eight great macabre stories of murder, mystery...and magic!