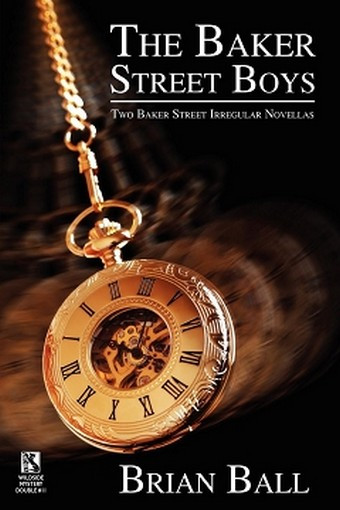 In the tradition of the Ace Doubles (flip the book over to read the second title), here's the eleventh Wildside Mystery Double:

THE BAKER STREET BOYS: TWO BAKER STREET IRREGULAR NOVELLAS, by Brian Ball. If Mr. Sherlock Holmes had been in the country when the Baker Street Irregulars stumbled across the mystery of the Captive Clairvoyant, then no doubt he would have given immediate assistance. But Mr. Holmes was in Switzerland engaged in a deadly duel of wits with his most feared opponent, the evil Professor Moriarty; and so the Baker Street Irregulars, the gang of ragamuffins who sometimes assisted Mr. Holmes in his investigations, had to rely on their own wits. It all began-and ended-in Trump's Music Hall, the theatre where Sparrow was employed, where the star of the show was The Amazing Marvin, Hypnotist Extraordinaire and Mentalist Supreme! But Marvin had a secret and sinister agenda.... Two marvelous tales of Holmesiana!

TIME FOR MURDER: MACABRE CRIME STORIES, by Sydney J. Bounds. When Chalmers decides to attend one of Dr. Lanson's nightly séances, it's not because he has any belief in the occult, but simply to find somewhere warm to rest his weary feet. It's a decision he soon regrets. First, a luminous cloud forms in the air over the heads of the assembled people. A strange voice speaks, warning that someone in the room is about to die to prevent him from revealing secrets. The man sitting next to him leaps to his feet, yelling his defiance--and then the lights are extinguished. As the man's voice is cut off, a girl's ear-piercing shriek reverberates...and Terror Stalks the Séance Room! Just one of eleven exciting macabre crime short stories by a master of the form!