Wildside Double #32: The Chronotope and Other Speculative Fictions / Poison from a Dead Sun: A Science Fiction Tale, by Michael Hemmingson (Paperback) 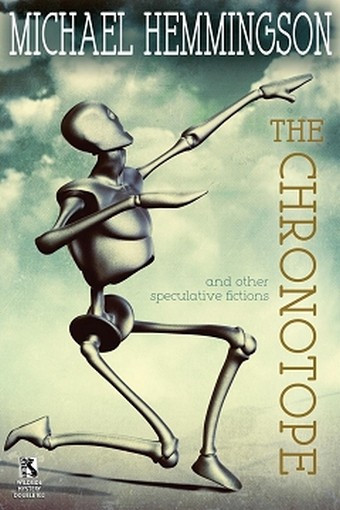 Wildside Double #32: The Chronotope and Other Speculative Fictions / Poison from a Dead Sun: A Science Fiction Tale, by Michael Hemmingson (Paperback)

In the tradition of the Ace Doubles (flip one book over to read the second title), here's the thirty-second Wildside Double:

THE CHRONOTOPE AND OTHER SPECULATIVE FICTIONS, by Michael Hemmingson. Time travel and brothels; unusual visitors from different eras, dimensions, and realities; human zoos maintained by curious aliens who like to watch; private eyes who are zombies; leafy-green literary collaborators; moral steampunk issues; a dreamer at the edge of the solar system; an astronaut who's gone insane; and the conspiracies of chrono-assassins--just a few of the fantastic themes in these 16 stories from Michael Hemmingson's first collection of speculative fiction: page-turners, every one of them!

POISON FROM A DEAD SUN: A SCIENCE FICTION TALE, by Michael Hemmingson. Since childhood, Noel has had a psychic connection to the nuclear fish monster, Goldgotha, whom he can summon by thought to defeat nefarious aliens and their allied creatures. Then The Consortium invades earth with the intent of enslaving mankind. Nolan calls upon his irradiated giant goldfish once again to save the day--but is he actually being deceived about the truth? Entertaining SF that stretches the imagination with new twists to classic themes of wonder!