The Maker of Gargoyles and Other Stories, by Clark Ashton Smith (Hardcover) 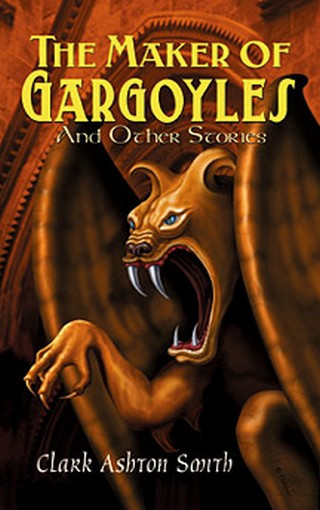 The Maker of Gargoyles and Other Stories, by Clark Ashton Smith (Hardcover)

Clark Ashton Smith was a prodigy, who wrote Arabian Nights novels in his mid-teens and was heralded as a major voice in American poetry by the time he was nineteen. In one frantic burst in the middle 1930s, he wrote nearly a hundred strange, wondrous, and grotesque stories, most of which were published in Weird Tales, Strange Tales, Wonder Stories, and other pulps, but he was by no means a conventional pulp writer. A direct heir to Edgar Allan Poe and to the late Romantics and Decadents, a translator of Baudelaire, Smith wrote in baroque, jeweled prose of distant times and remote planets, of baleful magics and reanimated corpses, lost lovers, eldritch gods, and inexorable fate. He is also a writer whose works refuse to die, even after nearly a century. Think of him as the sorcerer-poet, alone in his eyrie in the dry California hills, dreaming his strange dreams and creating his unique worlds-of Zothique, the Earth's haunted last continent at the end of time, Hyperborea, a prehistoric land, Poseidonis, the last foundering isle of Atlantis, and Averoigne, an unhistoried province of medieval France, thick with vampires. Think of the visions his stories conjure up as sendings, written in strange runes, transported from the sorcerer's lair by indescribable genii or winged spirits. His stories are altogether unlike anyone else's and quite wonderful, among the treasures of fantastic literature. This fine collection of Clark Ashton Smith's work reprints eight of his classic fantasies, including two set in Hyperborea.

Klarkash-Ton, Sorcerer-Poet, by Darrell Schweitzer (intro)
The Abominations of Yondo
The Testament of Athammaus
The Third Episode of Vathek
Thirteen Phantasms
The Resurrection of the Rattlesnake
The Nameless Offspring
The Maker of Gargoyles