The King of Rome: A Play in Five Acts, by Charles Desnoyer and Leon Beauvallet (Paperback) 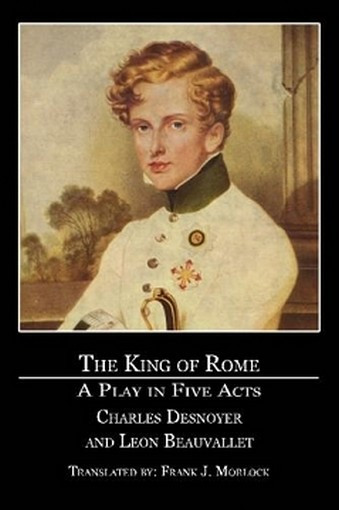 The King of Rome: A Play in Five Acts, by Charles Desnoyer and Leon Beauvallet (Paperback)

Charles Desnoyer (1806-1858) and Lon Beauvallet (1828-1885) were French playwrights of the mid-nineteenth century. THE KING OF ROME focuses on the Emperor Napoleon's only son, the Duke of Reichstadt, who was held a captive by his maternal grandfather, the Emperor of Austria. Fearing that he would emulate his father or be used by a Napoleonic conspiracy to capture the French throne, the Duke was kept in ignorance of his father's identity, as well as of the basic facts of recent European history; and an attempt was also made to debauch his morals, in order to discredit his name if he did escape. This play traces the attempt of a French soldier to penetrate the Austrian palace where the boy was kept, as part of a failed attempt to free him from his "prison"; and the awakening of the younger Napoleon to an awareness of his deadly family heritage. First-rate political drama by two accomplished writers!