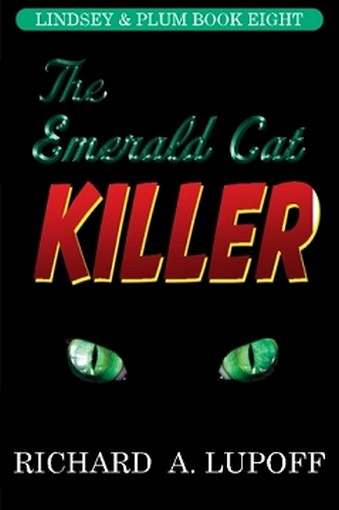 THEIR LAST BOW. A cache of stolen comic books had originally brought insurance man Hobart Lindsey and police officer Marvia Plum together. They were as different as different could be: he, a diffident suburban bachelor living with an emotionally damaged mother; she, a tough inner-city cop raising an at-risk child. Their tumultuous relationship endured for seven years, then seemingly ended as Marvia Plum abandoned her career to return to the arms of an old flame while Lindsey's duties carried him thousands of miles away. Now, after fifteen years apart, Lindsey and Plum are thrown together again by a series of murders, all of them centering around a lurid, trashy paperback novel. For the legions of fans who demanded to know what would become of these two so-different figures should they ever find their way back to each other: the answers are all in The Emerald Cat Killer, the eighth and final novel in Richard A. Lupoff's mesmerizing mystery series!