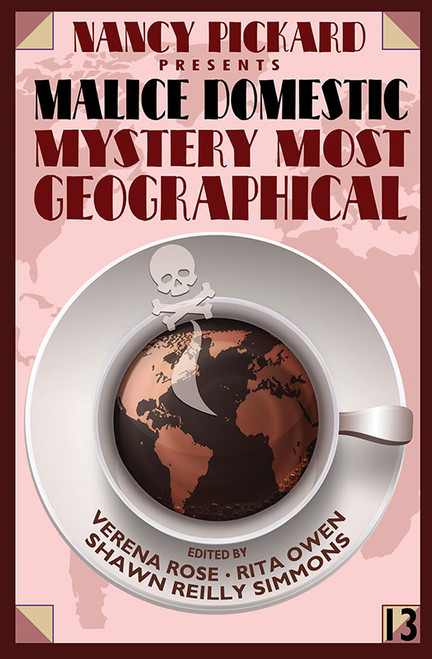 The Malice Domestic anthology series returns with a new take on mysteries in the Agatha Christie tradition -- 30 original tales set around the world! Included are:

The Barrister's Clerk, by Michael Robertson
The Belle Hope, by Peter DiChellis
Arroyo, by Michael Bracken
Muskeg Man, by Keenan Powell
The End of the World, by Susan Breen
To Protect the Guilty, by Kerry Hammond
Dying in Dokesville, by Alan Orloff
The House in Glamaig's Shadow, by William Burton McCormick
Summer Smugglers, by Triss Stein
The Jamaican Ice Mystery, by John Gregory Betancourt
Death at the Congressional Cemetery, by Verena Rose
Cabin in the Woods, by Sylvia Maultash Warsh
Mad About You, by G. M. Malliet
What Goes Around, by Kathryn Johnson
Summer Job, by Judith Green
Death in a Strange and Beautiful Place, by Leslie Wheeler
We Shall Fight Them, by Carla Coupe
Marigold in the Lake, by Susan Thibadeau
Murder on the Northern Lights Express, by Susan Daly
Czech Mate, by Kristin Kisska
Keep Calm and Love Moai, by Eleanor Cawood Jones
Isaac's Daughters, by Anita Page
A Divination of Death, by Edith Maxwell
Payback With Interest, by Cheryl Marceau
Island Time, by Laura Oles
If It's Tuesday, This Must Be Murder, by Josh Pachter
The Breaker Boy, by Harriette Sackler
Death on the Beach, by Shawn Reilly Simmons
Ridgeline, by Peter W. J. Hayes
Ho'oponopono, by Robin Templeton