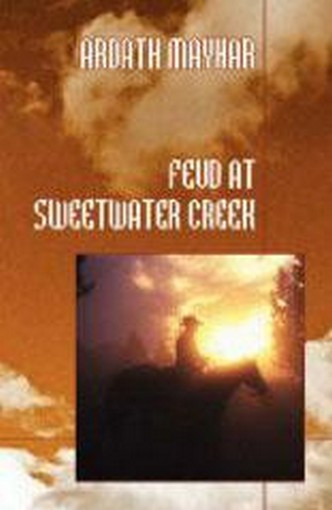 THE GREED OF THE RAILROAD BARONS!

George Fitch, an ex-Civil War soldier, is summoned to his parents' New Mexico homestead. He arrives accompanied by an ancient Indian medicine man and two trappers, to find that his mother's cousin, on a neighboring homestead, is methodically depopulating the valley. The great railroad barons are stealing huge tracts of land, using imported gunslingers to run off or murder the legitimate homesteaders.

Only George, his three friends, his mother, his father (lamed by a previous attack), and a very old and determined black lady remain to defend the Fitch ranch. Using inventiveness, skill, and pure grit, this small group rallies what help can be found and faces down the opposition. It's do or die as the Feud at Sweetwater Creek finally comes to a head.

"A fantastic western, with well-drawn characters, a strong sense of the post-Civil War environment, and plenty of shoot-'em-up action. Once again Mayhar just blows us away!" -- Robert Reginald.

Ardath Mayhar is the author of more than sixty books, including science fiction, fantasy, western literature, poetry, and young adult tales, many of them being published by the Borgo Press imprint of Wildside Press. She lives and works in Eastern Texas.