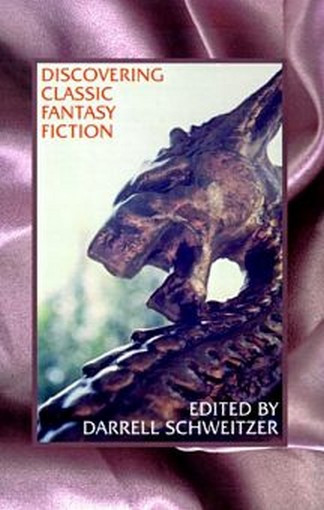 It didn't all start with Tolkien! Long before THE LORD OF THE RINGS, there were many great fantasy works and great fantasy writers. Here leading critics explore the lives and works of the great fantasists of the past, concentrating on writers of the late 19th to mid-20th centuries.

"Lord Dunsany: The Career of a Fantaisiste" by S.T. Joshi.
"James Branch Cabell: No Fit Employment for a Grown Man" by Don D'Ammassa.
"Mervyn Wall and the Comedy of Despair" by Darrell Schweitzer.
"John Collier: Fantastic Miniaturist" by Alan Warren.
"A Merritt: A Reappraisal" by Ben P. Indick.
"Villains of Necessity: The Works of E.R. Eddison" by Don D'Ammassa.
"Subtle Perceptions: The Fantasy Novels of Algernon Blackwood" by Jeffrey Goddin.
"David Lindsay and the Quest for Muspel-Fire" by Galad Elflandsson.
"Classic American Fairy Tales: The Fantasies of L. Frank Baum" by Neal Wilgus.
"Henry Kuttner: Man of Many Voices" by Don D'Ammassa.
"Of the Master, Merlin, and H. Warner Munn" by Don Herron.

With bibliographies and index.

DARRELL SCHWEITZER is himself a leading critic, author of books on H.P. Lovecraft and Lord Dunsany. A collection of his own critical essays, WINDOWS OF THE IMAGINATION, is also available from Wildside Press. As a fiction-writer, he has been nominated for the World Fantasy Award three times. He is the author of THE MASK OF THE SORCERER and THE SHATTERED GODDESS. He has been co-editor of the classic magazine Weird Tales since 1988.