Across the Wide Missouri, by James Brown Campbell (Hardcover) 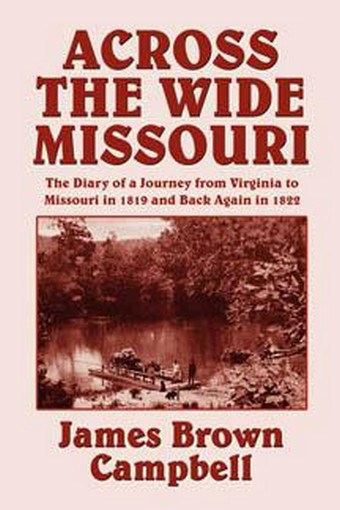 Across the Wide Missouri, by James Brown Campbell (Hardcover)

In the summer of 1819, Alexander Campbell and his family and their servants, along with other travelers, departed from the comparative comfort of their home in Highland County, Virginia, to set forth on a pio-neering trek to the wilderness country of the Missouri Territory. James Brown Campbell, the family's eldest son, then only twenty years of age, began keeping a diary of their journey, recounting their terrible hardships, both on the way and after arriving in the "Promised Land," plus a detailed account of his work surveying parts of Missouri Territory, and their final, excruciating trip back home in 1821, a trek that was forced to an abrupt halt by the sudden illness and poignant death of Campbell's mother near Paoli, Indiana.

Published for the first time ever, and meticulously edited by James's great-great-grandniece, Mary A. Burgess, this fascinating transcription includes a genealogical sketch of the Camp-bell clan, a map of the Missouri Territory, and extensive name and place indexes. Not only illustrative of its period and the hardships endured by those who headed west into essentially unchartered land, this book provides a moving and thought-provoking account of life during America's pioneer days.

MARY A. BURGESS has contributed numerous essays on literature and history to a variety of reference publications; she has also edited or written twenty books. MICHAEL BURGESS is an emeritus professor in the California State University System.